For contractors, the US Indo-Pacific strategy means business opportunities

By Mar-Vic Cagurangan Sen. James Moylan cliched the Guam delegate seat and became the first Republican to hold the position after...

No man's land: Taiwan is fighting for its rightful place in the world

By Mar-Vic Cagurangan Taiwanese people go about their daily routines in the bustling streets of Taipei, where towering buildings and...

By Jinky Jorgio Manila—Like most overseas Filipino workers, Juliet Endozo Mendoza works abroad to help her family. She has been working...

Saipan — As I write this, the CNMI is getting ready for the gubernatorial runoff which will be held on the day after Thanksgiving. If...

Attitudes toward age: the not-so-hidden bias

The faded photo of my grandmother was taken in the early 1930s. It shows a short, plump woman wearing a summer dress, her grey hair in a...

This is the continuation of “Mom’s Herstory,” as printed in the November issue of Pacific Island Times. It is an honor to have a glimpse...

Guam is a backdrop

I am excited to share with you an artist who travels with her art. Let me tell you why this is important. She is a military spouse. As a...

Bridgman, MI—It was an overcast and chilly November afternoon in Pontiac, Michigan in 1981 as my nephew Michael and I neared the Pontiac...

Manila – One of my friends quit his job as I was about to start mine. His quitting was the end of an incredible career in international...

Sen. Amanda Shelton on Wednesday introduced two bills that would appropriate $433,000 from the Tobacco Settlement Fund to the University of Guam and $238,190.70 to the Guam Community College. Guam, along with five territories and 46 states, was allotted funds from the 1998 Tobacco Master Settlement Agreement that was created by four of the largest tobacco companies in America. Part of the funds were set aside for UOG and GCC through Public Law 25-187, authored by the late Sen 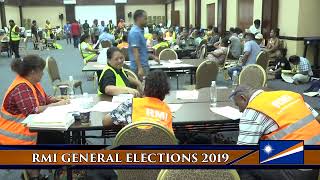 Majuro-- With over half of Majuro votes tabulated as of Tuesday morning, unofficial results suggest three of the five Parliament incumbents on the Marshall Islands' main atoll are in danger of losing their seats. There are still five wards to tabulate as counting continues at the International Conference Centre. The Marshall Islands national election moved from voting to tabulation around midnight last night, as the spotlight turned to election headquarters. By 9am Tues
By Alex J. Rhowuniong

U.S. Secretary of Defense Mark T. Esper met with Japan's Defense Minister Kono Taro in Bangkok, Thailand on the sidelines of the ASEAN Defense Ministers Meeting (Plus). Both leaders reaffirmed that the U.S.-Japan Alliance remains the cornerstone for peace, security, and prosperity in the Indo-Pacific region, and discussed ongoing efforts to strengthen the Alliance to meet the dynamic challenges of today’s security environment. Esper and Kono recommitted to maintaining a free
By Pacific island Times News Staff

The 68th iteration of Operation Christmas Drop is set to take to the Pacific skies, Dec. 9 hosted by the 36th Wing. The Department of Defense’s longest recurring humanitarian mission is a long-standing annual tradition of packaging and delivering food, tools and toys to more than 57 remote islands in the South-Eastern Pacific, including the Commonwealth of the Northern Mariana Islands, the Federated States of Micronesia, and the Republic of Palau. During the weeklong internat
By Pacific island Times News Staff

Majuro — As the Republic of the Marshall Islands prepares for Monday’s elections, President Hilda Heine is appealing to voters to give her administration another term in office, saying the nation has surged ahead over the last four years. “When I came to office four years ago the Marshall Islands was in a holding pattern, and politicians were more concerned about being re-elected than governing for the people,” Heine said. “Yet, and I say this with the greatest of humility, w
23
4
56
Click here to subscribe to our print edition
Contact Us: pacificislandtimes@gmail.com